November sees one of Okinawa’s biggest festivals, the so-called “Shuri-jo Matsuri” (Festival of Shuri Castle) and with it comes a long list of traditional dances, songs, concerts, shows, parades and nighttime illuminations. The festival lasts around a week and is one of the best times of the year to visit Okinawa if you’d like to get to know their unique culture: a moment when the Ryukyu Kingdom comes alive again for a few days.

In 2017, the festival was celebrated on the 3rd, 4th and 5th of November and in 2018 the most important events took place on the 28th of October and 3rd of November. As you can see, every year the dates change a little, but November 3rd is Culture Day all over Japan and is the main day of the festival on any year.

Most events are held around Shuri Castle, a site that almost everyone visiting Okinawa will see (it’s worth it)! Stop by the Information Centre first to pick up a pamphlet for a stamp rally and a little gift. 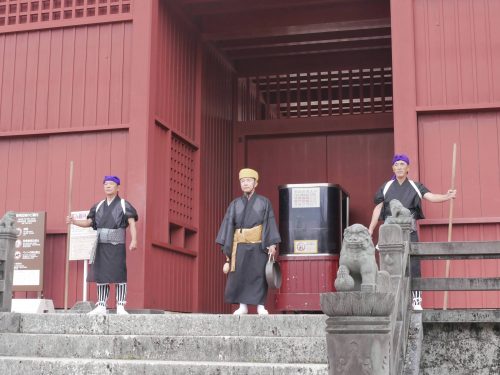 My day started with a visit to Shuri Castle. Every morning, even days without festival events, they open the castle gates at 8:30am with a man yelling “ukejo”. The man, standing between guards of the castle, also bangs a gong a few times. After that, the castle doors and ticket booth open for the day. This is the best moment to visit the castle, just an hour later the halls will be full with students on school trips and tourists. 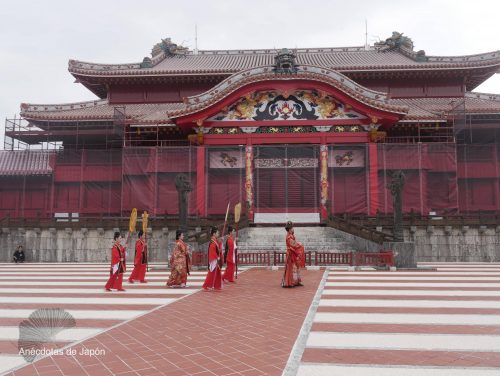 Whenever a new king was nominated for the throne of the ancient Ryukyu Kingdom, they would receive a crown from China. Chinese envoys had to wait for favourable winds to be able to sail to Okinawa and once they arrived it was common to have to wait around three months before being able to return. The Ryukyu people had to come up with many ways to entertain them! The Shurijo Festival is actually a collection of dances, songs and theater used to entertain the envoys, as well as various other celebrations and ceremonies that were done to welcome the Chinese arrival.

During the festival, two volunteers get to dress as the King and Queen and parade around the castle. It’s a great opportunity to see Okinawa’s traditional clothing from up close. 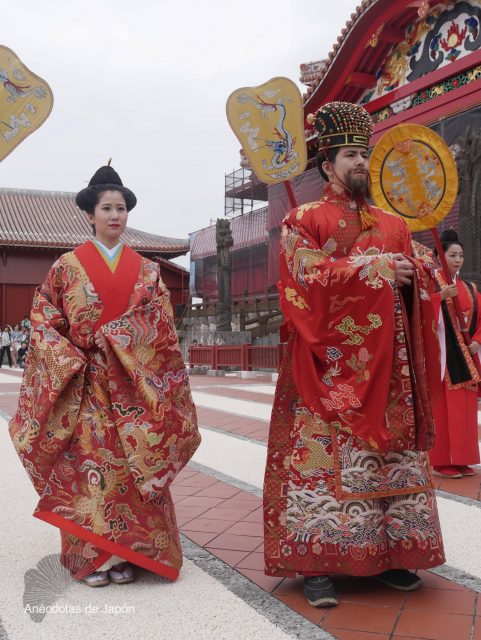 The first parade started at noon the next day, going from one end of Kokusai Street, near Kencho-mae station,  down to the other, in front of the Naha City Tourist Information Centre and Arts and Crafts Centre. There are a few checkpoints along the road, easily spotted thanks to the signs and crowds, where the parade will stop and different groups will do various different demonstrations. However, if you want some good photos of the parade, you should stay near the start of the street before they reach the first check-point! 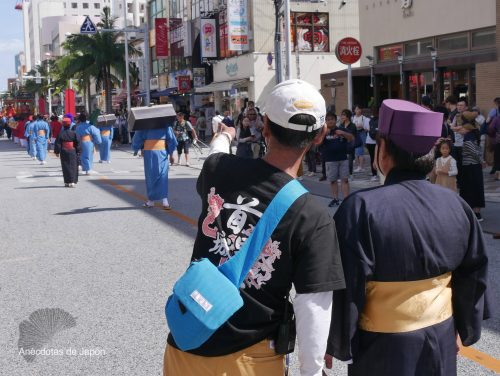 Chinese envoys as they would’ve arrived to Okinawa: 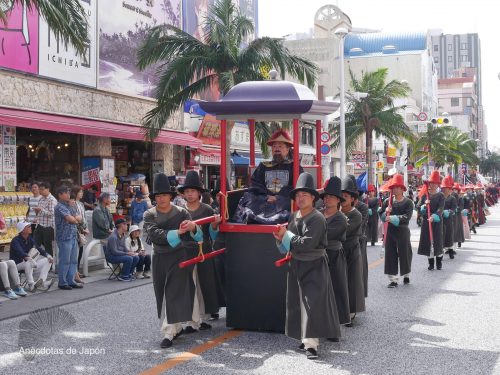 The first demonstration I saw were these boys doing a fan dance: 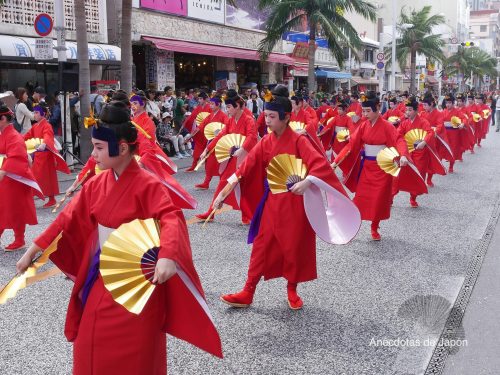 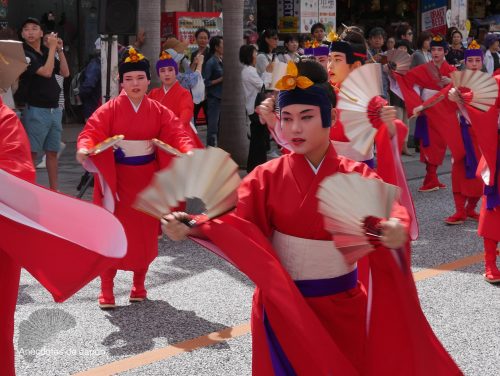 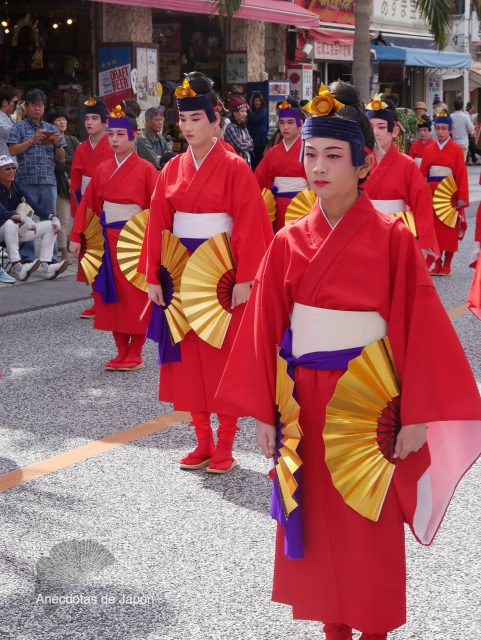 Okinawa has a special dyeing technique known as “bingata”, it was and is used in kimonos and even T-shirts or decorative tenugui and cloths nowadays. Dried coral is used as a sort of brush for the colour gradients. These kimono worn by the dancers are bingata. 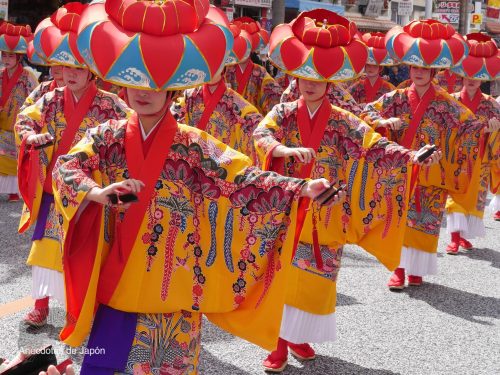 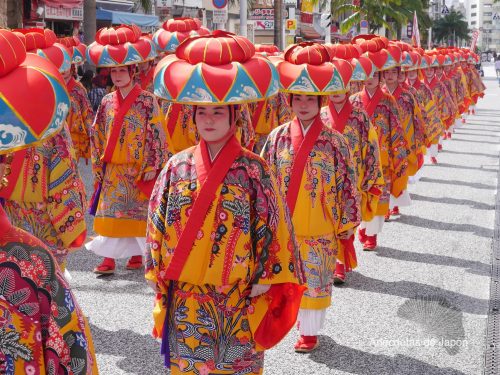 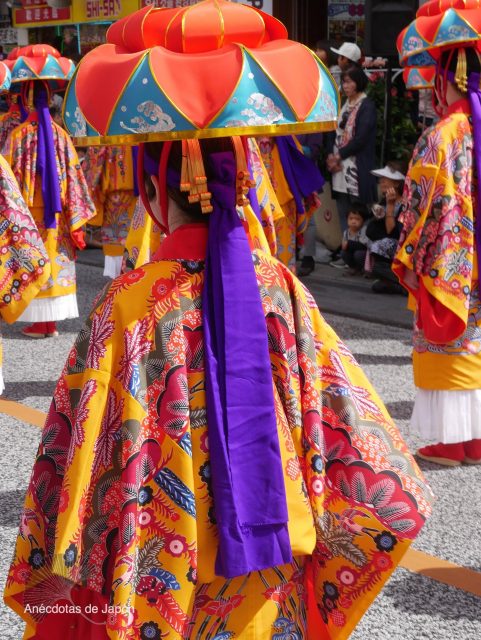 This “yotsudake” dance is probably the most popular, with their distinctive yellow kimono and wagasa hats. Their hats symbolise the sun (red) and the ocean (blue), while yellow was the colour of the Queen. It was a royal dance and still today one of the most esteemed aspects of Okinawa’s culture. 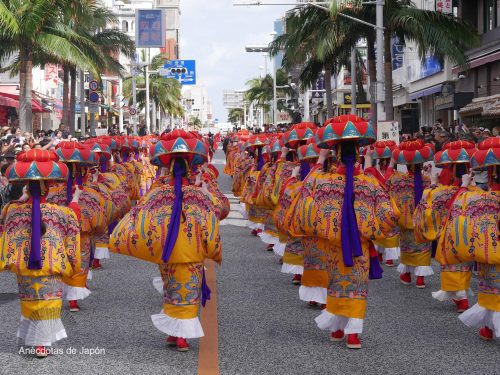 Many other dances and songs can be enjoyed, some were rural dances or events from local festivals across the island. I also caught a short eisa drumming performance! 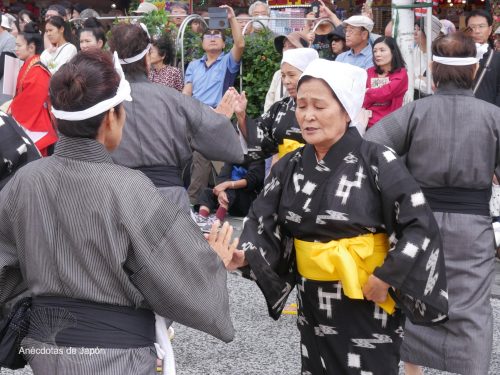 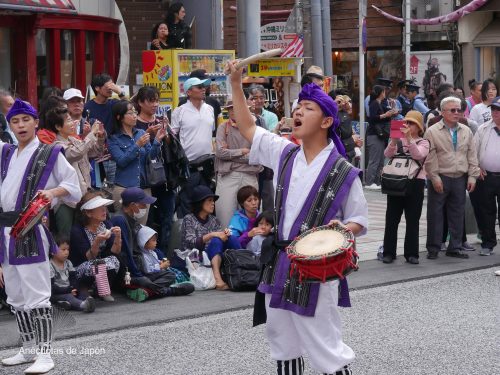 After the parade, hundreds of karate students take the spotlight for an impressive display of Okinawa’s internationally famous martial art! 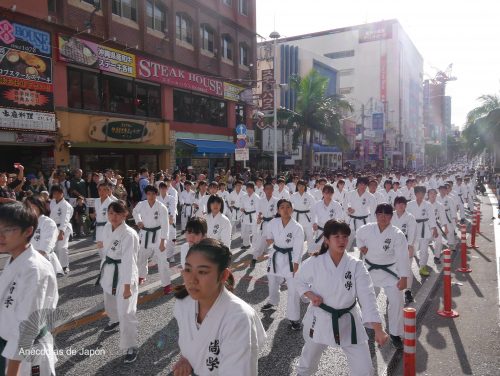 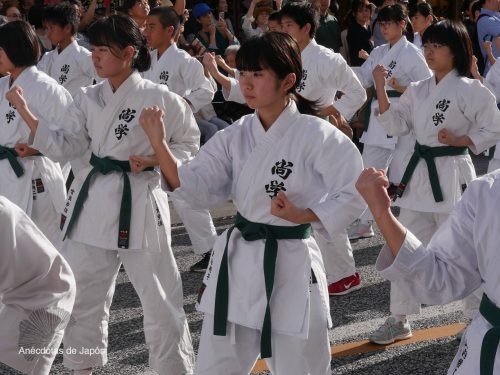 During the entire week of the festival, Shuri castle sets up a stage in the grounds’ free area and does four sets of dances at different times of the day. They’ll post the timetable at the castle’s Rest Centre.

I saw 16 dances over the course of the week, I think I got to see most of what they had in their repertoire because a few were repeated.

My favourite was probably this traditional “kashikaki” dance. The colourful stick she carries is used for weaving clothes. The materials are just a prop, the real tool would be much bigger in reality. 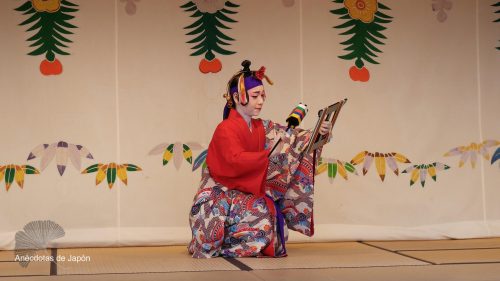 Below is a zo-odori performance, popularized among the lower classes towards the end of the Ryukyu Dynasty, quite fast paced compared to the other dances: 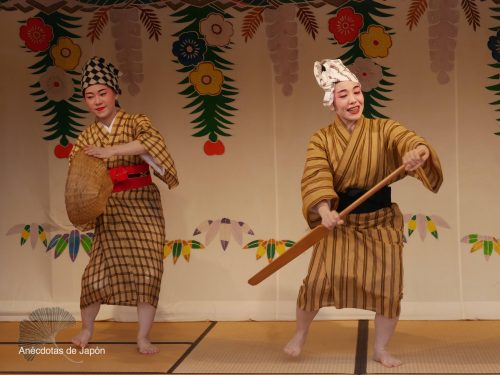 A royal dance with another beautiful bingata dyed kimono! 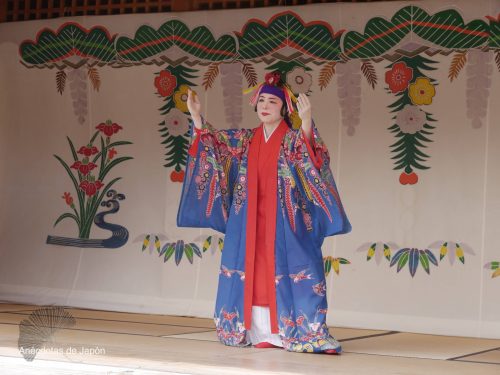 When enjoying Okinawa dance, look out for the sequence of ogamite (sacred hands). First the dancers move their hands towards them facing upwards. This is to give gratitude to the gods. The third gesture is similar but inverted, they move their hands down as if bowing. This is a way of thanking the gods for coming and seeing them off as they depart. The second gesture, in between these two, is a twirl of the hand in a way that reminds of traditional Thai dances. It was indeed brought from Thailand! Okinawa’s history as a trading nation meant they recieved many influences from South East Asia as well as China and Japan.

Unfortunately it rained on my last day so the second and main parade was cancelled. I’ll have to return another year! And with that, thank you for reading. Here is an ogamite “goodbye”: 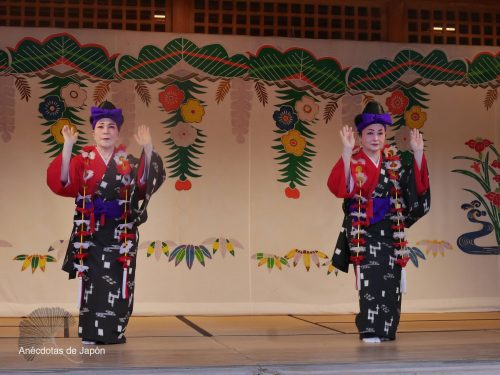 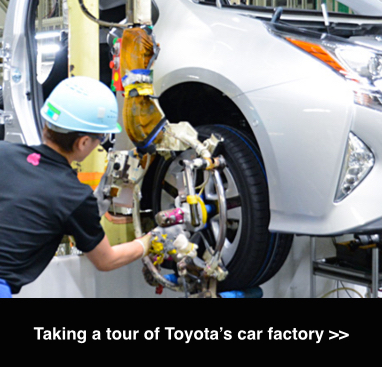